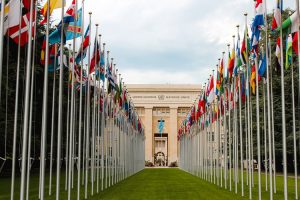 The U.N. body that decides drug policy has a plan for moving forward with a landmark vote in December on whether to revise the inclusion of cannabis and cannabis-related substances in two international narcotics conventions.

The roadmap from the U.N. Commission on Narcotic Drugs (CND) for holding the vote despite the global coronavirus pandemic was outlined in a May 19 document from Chairman Mansoor Ahmad Khan that was circulated among member nations and obtained by Hemp Industry Daily.

The document proposed that member countries of the U.N. drug-policy body participate in three closed-door “topical” meetings and one “intersessional” meeting prior to a December vote.

The outcome of the vote remains uncertain, as the stance of the body’s 53 member countries toward on cannabis scheduling changes range from fierce opposition to tepid support.

But revising how CBD and other cannabis extracts are classified in the conventions on narcotic drugs could have far-reaching implications for the hemp industry.

Cannabidiol, one of at least 113 cannabinoids in the cannabis plant, has been touted for its potentially therapeutic effects, but products containing hemp-derived CBD have been in murky legal territory as a result of the inclusion of cannabis in the Single Convention on Narcotics Drugs (1961) and the Convention on Psychotropic Substances of 1971.

The U.N. placed cannabis in the strictest categories in the 1961 and 1971 conventions, allowing the plant’s use for medical and scientific purposes while exempting industrial hemp from their jurisdiction. As in the case of other U.N. treaties, though, nations that signed the conventions but tolerated violations of the cannabis rules – the United States and Canada, for example – have not faced any sanctions.

The way that drugs and substances are categorized, or scheduled, in the international narcotics conventions is reviewed periodically by a select group of experts at the World Health Organization.

In January 2019, Marijuana Business Daily was the first to report the World Health Organization’s recommendations for changing how cannabis and cannabis-related substances are scheduled.

Among its recommendations, the WHO expert group said the 1961 convention should include a footnote that “preparations containing predominantly cannabidiol” with less than 0.2% THC are not under international control.

The U.N. drug-policy body, the CND, had been expected to consider the experts’ recommendations at its March 2019 annual meeting, but a delay in receiving them led the vote to be postponed to December 2020.

The path to a December vote

According to the letter currently being circulated among CND members, the first meeting to prepare for a December vote has been proposed for the end of June.

The first meeting should be held virtually, and those that follow could occur remotely as well, depending on the status of the Covid-19 pandemic.

The meeting schedule proposed is as follows:

The first three meetings would be open to U.N. member states and could include subject-matter experts from those countries. The WHO would be represented in the meetings “in case any medical or scientific question arises,” and the International Narcotics Control Board and the United Nations Office on Drugs and Crime would also attend.

The topical meetings would be held behind closed doors to address any questions about the reasoning behind and the implications of the WHO’s recommendations, and to “enable an informed decision at the 63rd reconvened session in December 2020.”

The fourth “intersessional” gathering in September would include non-governmental organizations and the press. During this meeting, member countries “will have the opportunity to recapitulate relevant arguments and sum up their positions and, in addition, other stakeholders may share their views.”

Martin Jelsma, drugs and democracy program director at the Netherlands-based Transnational Institute, told Hemp Industry Daily that his organization is positive the three topical meetings will be held before October.

The WHO expert committee that drafted the recommendations on cannabis scheduling, the ECDD, is scheduled to meet in October. That means that, according to the U.N. drug-policy body’s vote preparation schedule, “there’s a chance to discuss the outcome of the informal intergovernmental debate at the ECDD meeting,” Jelsma said.

According to Jelsma, this is important because, “if they see a legitimate reason to do so,” ECDD members could make changes in time for the December vote.

In early 2020, the European Union showed no sign of supporting a WHO recommendation that would clarify that preparations containing predominantly CBD and less than 0.2% THC are not under international control.

But earlier this month, the advocate general of the Court of Justice of the European Union (CJEU) issued an opinion that cannabidiol is not a narcotic and is therefore protected by EU law on the free movement of goods. The case originated with a dispute in France over the marketing of a CBD vape product whose contents were imported from the Czech Republic.

That opinion could influence how EU member states vote, said Eveline Van Keymeulen, a Paris-based attorney at Allen & Overy who represented one of the litigants in the CJEU case.

She pointed out that the advocate general “advocated for an adequate and proportionate approach towards products containing CBD instead of arbitrary prohibitions” like the ban France imposes on all hemp-derived cannabidiol products.

EU member countries represent close to a quarter of the total seats on the U.N. drug-policy body and will need to have a position about the CBD-specific recommendation if a vote is held in December.