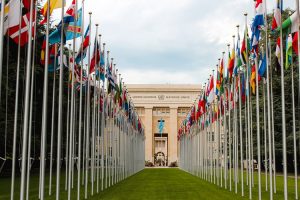 (This story has been updated to correct the name of the representative speaking for the United States.)

The United States says it does not support a World Health Organization proposal to remove CBD extracts with less than 0.2% THC from international drug control.

U.S. State Department attorney Patt Prugh, speaking Thursday to a United Nations gathering in Vienna, said that a proposal to exclude low-THC cannabis products that are “predominantly” CBD from the jurisdiction of a 50-year-old global drug treaty could “introduce legal ambiguities and contradictions that would undermine effective drug control.”

Prugh said the U.S. supports removing cannabis from Schedule 4 of the Single Convention on Narcotic Drugs (1961) – but not adding a footnote to exempt mostly CBD preparations.

She added that the CBD footnote and other WHO-suggested changes to cannabis scheduling could unintentionally authorize THC extracts, which would “undoubtedly lead to further cannabis abuse.”

Prugh made the comments virtually during a final meeting of the U.N. Commission on Narcotics Drugs ahead of a December vote on if and how to change the way cannabis is scheduled in international narcotics treaties.

The U.S. reiterated support for removing cannabis from Schedule 4 of the 1961 convention. The category is reserved for drugs that are “particularly liable to abuse” and don’t have “substantial therapeutic advantages.”

Last year, the World Health Organization made six recommendations for changing the way that cannabis and cannabis-related substances are scheduled in the Single Convention on Narcotic Drugs (1961) and the Convention on Psychotropic Substances of 1971.

Most of the cannabis-scheduling recommendations would have little impact on international drug controls or tighten requirements. But two could affect products containing plant-derived cannabidiol:

CBD is not specifically listed in the international drug control treaties but is covered by the 1961 convention, both as a “preparation” and as an “extract or tincture” of cannabis.

On Thursday, Prugh said that the United States would support only two of the six recommended changes:

Prugh argued that the other recommendations, including the suggested footnote on CBD, lie “outside the scope of the scheduling process.”

“If adopted, at best, they would introduce legal ambiguities and contradictions that would undermine effective drug control, and at worst they could result in the exclusion of control of all THC derived from cannabis cultivated for industrial purposes and THC derived from leaves separated from the cannabis plant,” Prugh said. “This would undoubtedly lead to further cannabis abuse.”

Prugh said the United States believed it was up to member states to assign a THC threshold for criminalization and that it “firmly oppose(d) measures that would add to the financial burdens of member states and the UN system.”

Prugh’s speech to the CND was also heavily focused on the importance of research and the growing interest in cannabis-based therapies. She pointed out that the United States had approved marijuana-derived CBD drug Epidiolex and three other synthetic cannabis-related drugs to treat several medical conditions.

“This newfound therapeutic usefulness, which is not possessed by other substances, warrants the removal of cannabis from Schedule 4,” Prugh said.

“The United States understands that there is increasing interest in the potential utility of cannabis for a variety of medical conditions, as well as research on the potential adverse health effects from the use of cannabis.”

Prugh’s comments about the CBD footnote echoed concerns raised in June by a U.N. monitoring body.

The International Narcotics Control Board – an independent and quasi-judicial monitoring body – said that authorities in some countries may lack the lab technology or manpower to evaluate the cannabinoid profile of CBD preparations – making it difficult to ensure compliance with the exemption.