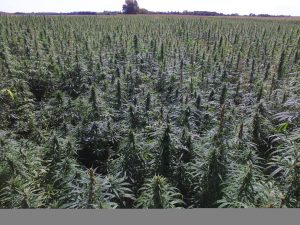 Federal agriculture officials with the U.S. Department of Agriculture signed off on hemp production plans for two states and a U.S. territory this week.

Minnesota, which has been a hemp state for six years under the 2014 Farm Bill pilot program, received approval for its plan on Tuesday.

The state declared earlier this year that it would continue to operate under the 2014 pilot for the 2020 season. USDA’s approval of the state’s new hemp plan doesn’t change that decision.

In January, Minnesota Agriculture Commissioner Thom Peterson wrote in a letter to the USDA that the Oct. 31 date to change over from pilot programs to approved USDA plans is impractical, causing inconveniences both for farmers and for state agriculture department staff.

“The two-month gap to fill in licensing will lead to confusion for growers, as well as be out of conformance with state law.”

Peterson pointed out that the October expiration date also falls during harvest, when state agriculture department staff will be focused on sampling hemp fields and too busy to manage applications and grant licenses before Nov. 1.

Although he thanked USDA for its work on the federal hemp program and approval of the Minnesota plan, Peterson said Tuesday that there is still work to be done.

“While this is a major step forward, there are still concerns over some of the regulations imposed on states and tribal governments, such as testing requirements,” Peterson said in a statement.

“We look forward to continuing our dialog with USDA so we can ensure Minnesota’s hemp growers and processors are successful in this fledgling industry.”

Currently there are more than 8,000 acres and 4 million square feet of indoor growing space registered in Minnesota, according to the state’s agriculture department.

The USDA also approved a production plan for a second U.S. territory, Puerto Rico. The U.S. Virgin Islands hemp plan was approved in May and hemp production in a third territory, Northern Marianas Island, is pending legislation.

Puerto Rico established a hemp pilot program in 2019, following approval of the 2018 Farm Bill, which authorized industrial hemp cultivation in the territory, said Congresswoman and resident commissioner Jenniffer Gonzalez in an announcement.

According to Puerto Rico’s approved plan, the island’s geographical location and tropical climate will allow for hemp to be harvested up to three times a year, providing the local industry an advantage over other regions.

Tennessee, another leading hemp state, gained USDA approval for its hemp plan Tuesday, although like Minnesota and more than 20 other states, production continues this season under the 2014 Farm Bill pilot program.

“We are evaluating the 2018 bill and potential changes to our program with continued focus on working with producers and industry to advance hemp in Tennessee,” Kim Doddridge, spokeswoman for Tennessee’s agriculture department, told Hemp Industry Daily in February.

The state’s hemp industry grew exponentially by more than 12 times year over year in 2019, licensing 3,800 producers and 51,000 acres of hemp by November.

Registrations renewed June 30 in Tennessee and the number of licensed growers and acreage has not yet been reported for 2020.

To date, the USDA has approved 53 plans under its interim final rules, including states, territories and tribal nations.