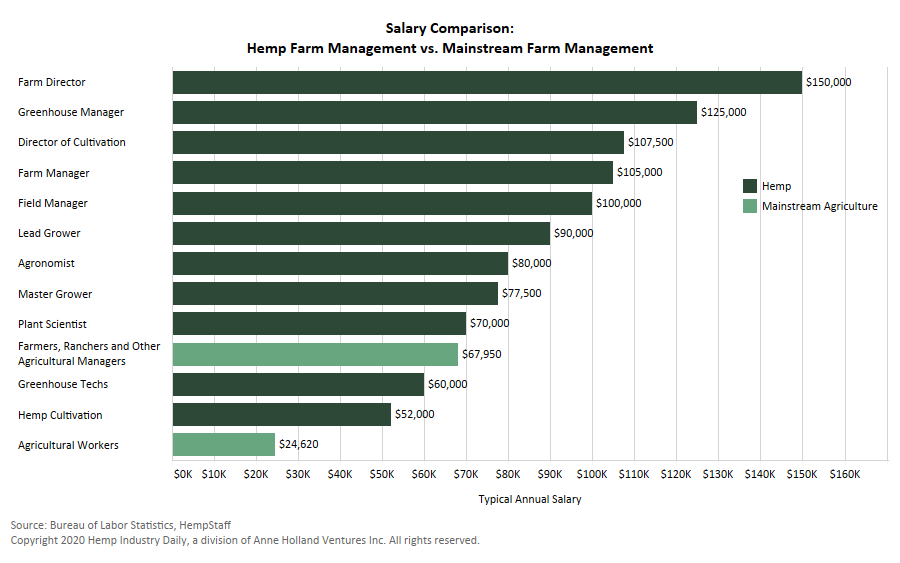 Careers in the booming hemp industry pay far better than their mainstream agriculture counterparts, according to new research.

A survey gathering salaries for hemp farming positions from executive management to farm labor by HempStaff shows that careers in hemp farm management outpace pay for similar careers in traditional agriculture, based on farm salary data from the Bureau of Labor Statistics.

Average annual pay for farmers, ranchers and other agricultural managers who manage traditional agricultural operations is just under $68,000.

That compares to higher-level management positions at hemp farms, which top out at $150,000 per year for farm directors.

Farm laborers earn less than half of the average salary for hemp cultivation workers, who make $52,000 annually, and hemp greenhouse technicians, who average out at $60,000 per year, the survey revealed.

Jobs in agriculture aren’t known for high pay, despite the long days, uncertainty due to weather and sometimes back-breaking labor that accompanies them.

That’s why farms and agribusinesses have long struggled to find qualified American workers for positions ranging from field work all the way up to the executive c-suite.

With a lack of available and willing skilled labor domestically, farmers have had to depend largely on foreign guestworkers, but they are required to pay at least minimum wage and provide housing for these workers, which also drives up the minimum they are allowed to pay non-guestworker laborers.

The hemp industry boom has caused high demand for agriculture professionals who are knowledgeable about managing operations and growing plants – and well-funded hemp companies have not been shy about paying more to recruit for these positions.

“The disparity is real and has caused some issues on both sides of this proverbial fence between mainstream ag and hemp,” Gordon told Hemp Industry Daily.

“On the hemp side, workers are demanding significantly higher wages for very similar field-style ag jobs and getting higher pay because of the demand for labor in a new agricultural sector.”

This is also true for greenhouse workers and people in management-level positions, said Gordon, who is also managing director at International Hemp Solutions.

The pay difference is causing problems for traditional farmers and ranchers that are dependent on low-cost labor.

“The other side of the coin is that some traditional farms or ranches are seeing their workforce diminishing as hemp farming rises in popularity and brings better financial opportunities for workers,” Gordon said.

But considering the industry’s struggles over the past year, with oversupply of hemp driving down prices and a delay in CBD regulation hindering growth, it’s likely hemp salaries will level off and become more comparable to those in similar agricultural careers, according to Todd Downing, managing partner of Best Human Capital and Advisory Group, an Indianapolis-based human resources consulting firm.

“Looking at the supply chain challenges that have affected the hemp industry, it’s almost been a perfect storm that hit all at once,” Downing told Hemp Industry Daily.

“Companies are looking at their bottom line and they’re seeing that they can’t sustain the level of compensations in the industry that they thought they could because of all these challenges.”