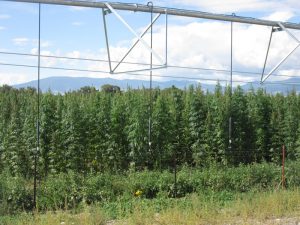 Colorado’s recent vote to move part of the hemp definition out of the state constitution has some entrepreneurs cheering, while others warn it could lead to federal meddling in the nation’s largest hemp market.

Amendment X left the overall definition of hemp in Colorado’s constitution but removed the THC limit of 0.3%. The change allows Colorado lawmakers – or Congress – to recalibrate hemp’s THC limit without voter approval.

The measure passed with more than 60% of the vote.

“Having the definition of hemp set in stone by the state’s constitution is inflexible,” said Jon Vaught, CEO of Front Range Biosciences, a cannabis biotech firm in Lafayette, Colorado.

“If the federal government amended the threshold to 0.5% or 0.7%, Colorado would have to wait until the next election,” he wrote in an email to Hemp Industry Daily.

That’s because Colorado had more acres in hemp than any other state in 2017 (2018 crop totals aren’t yet available in many states).

Colorado was also the only state to put a THC limit for hemp in its state constitution. The other 40 hemp states placed the THC limit in statutes, and almost all of them used the federal limit of 0.3%. (West Virginia is the exception, placing the limit at 1%.)

National hemp advocates believe hemp’s growing popularity means Congress may be inclined to elevate hemp’s THC maximum, a move many hemp farmers say could prevent them from having to destroy crops that test “hot,” or above 0.3% THC.

“I don’t think you’ll see it raised immediately,” said Jonathan Miller, lawyer for the U.S. Hemp Roundtable. “But I could see that happening in a year or two.”

Not all Colorado hemp entrepreneurs cheered the passage of Amendment X. Critics argued that:

“Removing (the THC limit) from the (state) constitution and putting it in the hands of Congress and lobbyists is not rational,” said Veronica Carpio, who has been growing hemp in Colorado since 2013, a year before the 2014 Farm Bill authorized states to produce hemp.

Carpio said the change puts Colorado’s hemp industry at risk because it assumes the state would follow whatever THC standard Congress prefers.

“The head honcho of hemp is now going to be the federal government,” Carpio said. “It leaves us open to exposure to federal intervention and possible federal charges and seizures.”

Other hemp businesses say it’s a safe bet that growing national support for hemp expansion means Colorado faces nothing but upside from taking hemp’s THC limit out of the state constitution.

“It’s a tool that will only benefit our industry,” said Morris Beegle, owner of Loveland-based Colorado Hemp Co., which makes hemp paper and other products.