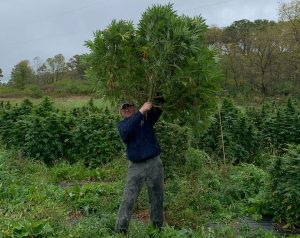 Hemp production is about to shift into overdrive in states where growers have been licensed to get started with the 2019 planting season.

There is a dramatic increase in interest among new farmers looking to capitalize on hemp in states that have been growing the crop under pilot programs.

The big hemp-producing states are getting bigger:

States that are newer to the hemp market, or have fewer overall farmers, also report monster 2019 acreage gain. Among the states notching big increases:

As it becomes clear that U.S. hemp production will far surpass 2018, some are warning that a big drop in prices is the likely result.

U.S. Secretary of Agriculture Sonny Perdue issued a warning this week that the nation’s farmers might be too enthusiastic about hemp.

“Farmers in the United States are so productive, they could crash this market before it gets off the ground,” Perdue warned.

Perdue’s comments came after two “listening sessions” in which hemp industry leaders told the U.S. Department of Agriculture (USDA) what they want to see in new nationwide hemp rules.

But hemp farmers such as Kattia Jimenez in Mount Horeb, Wisconsin, are more excited than worried.

Jimenez owns Mount Horeb Hemp Farm, a small operation outside Madison that grows hemp for CBD oil extraction. She said hemp is her “first foray into farming” and will plant 4 acres in 2019.

“I grew hemp last year, and it was extremely hard work but very rewarding,” Jimenez said.

Other Wisconsin farmers and allied businesses are just as hopeful about the prospects hemp offers, considering the tremendous interest in the state that spurred applications to increase by 600% year-over-year, she said.

“In our state, the hope is this new agricultural crop can help our struggling dairy farmers,” Jimenez said.