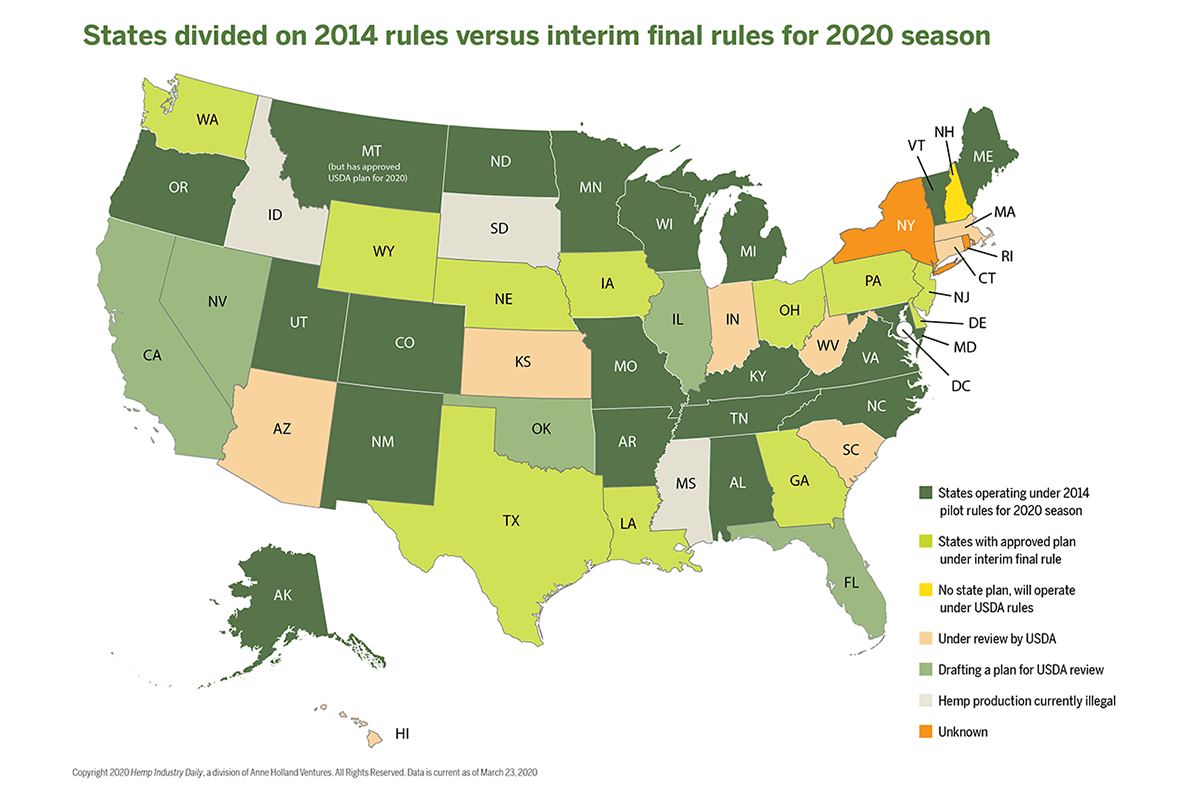 More states have declared that they’re going to stick with their own rules for the 2020 hemp production season, rather than follow federal guidelines on the new crop.

To date, 20 states have said they will follow the 2014 pilot rules this growing season, outnumbering the 12 that have so far received U.S. Department of Agriculture approval for their production plans under the interim final rule.

The result is that the nation will again see a patchwork of varying hemp production guidelines in 2020, despite federal efforts to streamline hemp regulations to mirror other commodity crops.

The USDA has also approved hemp production plans for 14 American Indian tribes and currently has 15 tribal plans and nine state plans under review. Five more states are working on a plan for USDA review, according to the agency.

Since early February, when Hemp Industry Daily reported that 14 states extended their current program rules into the 2020 production season, six more states have declared the same intent to the USDA, including Alabama, Alaska, North Carolina, Oregon and Virginia.

Sunny Summers, cannabis policy coordinator for the Oregon Department of Agriculture (ODA), said in late February that the state had received three times the number of hemp production applications as it had at the same time last year, according to the Capital Press of Salem Oregon.

Oregon, she said, asked the USDA for more flexibility in the federal hemp rules.

A Virginia official explained that the state would stick with its own rules and advised hemp farmers to go ahead and apply for licenses – with a warning that they would be notified if the rules change under the 2018 Farm Bill.

“We are right now in a period of reviewing the comments and feedback we received from USDA and considering what amendments are necessary for our plan to move forward,” said Erin Williams of the Virginia Department of Agriculture and Consumer Services.

In neighboring North Carolina, regulators say their sizable hemp production program and current legislation underway within the state would make it hard to implement the USDA interim final rule in 2020.

“We believe that it’d be difficult at this stage in the game to try to implement the USDA rule,” said Paul Adams from the North Carolina Department of Consumer Services.

“There are some legislative holdups in our state right now. We we are working on drafting a program, but it remains to be seen whether or not we will be submitting that.”

States have cited numerous reasons for extending their pilot programs for the 2020 season.

One of the top concerns is a set of THC sampling and testing protocols that states call laborious and expensive – even a risk to hemp farmers.

“There are 46 states where hemp is legal, and I’m going to say that every single state has raised concerns to us about something within the (USDA) rule,” said Aline DeLucia, director of public policy for the National Association of State Departments of Agriculture (NASDA).

“They might be coming from different perspectives, but every state has raised concerns.”

Many states have requested that the USDA extend the pilot from its Oct. 31 expiration through Dec. 31. That would allow producers to start and end the year operating under the same rules.

NASDA members adopted a policy item calling for extending the mandatory date of Oct. 31 for states to change from 2014 pilot programs to approved USDA plans.

“With the vast majority of states needing to call on their state legislatures to be in compliance with the rule, we need more time to stand up regulations that support the growth of our hemp industry,” NASDA CEO Barb Glenn said in a statement released by the association.

“States are doing what they can with limited resources to ensure regulatory compliance,” Glenn said.

U.S. Secretary of Agriculture Sonny Perdue said during a U.S. Senate Agriculture Committee hearing earlier this month that he had hoped to have more states approved under the federal rules for the 2020 season but understood why they opted to continue their 2014 pilot programs.

During that hearing, U.S. Sen. Jeff Merkley, a Democrat from Oregon, asked Perdue to clarify whether the interim final rule was a draft plan or a final plan.

Merkley pointed out that the distinction matters because states can operate under the 2014 pilot rules for only one year after the federal hemp rules are final.

Perdue said he “would functionally say it’s a draft plan, as this is a very unique crop,” and that he’ll be “as flexible as the law allows” if his agency can’t resolve state concerns about the federal rule by the 2021 growing season.

Despite the continued state-by-state patchwork of rules, the USDA continues to review state and tribal plans submitted for approval for the 2020 hemp production season under the interim final rules based on the 2018 Farm Bill.

In the past month, the agency has approved plans for:

One of those states, Montana, said that despite winning USDA hemp approval, it plans to operate under the 2014 pilot program for the 2020 season.

Changes from Pennsylvania’s 2020 plan include mandatory permits for processors, fee changes and new restrictions for hemp production and processing properties.

And another recent federal entrant, Georgia, said it will start taking applications later this month despite not yet settling how it plans to pay for its hemp program.

Iowa, the latest state to receive the green light for its program, needed federal approval to move forward with hemp production because it didn’t previously operate a state pilot.